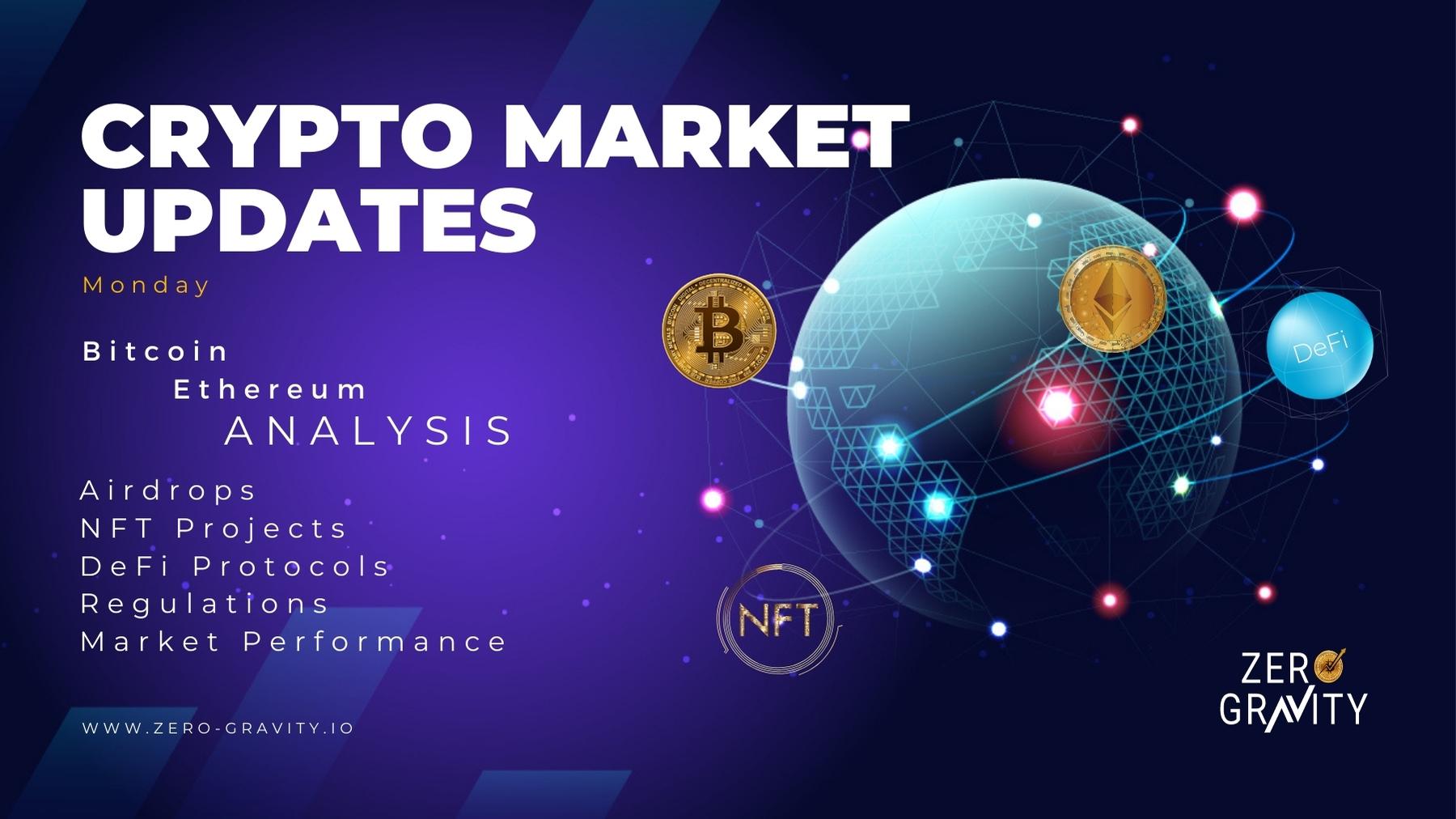 A daily round-up of the most important news stories within the cryptocurrency market in the last two days, including analysis of Bitcoin and Ethereum.

Before the downside correction, Bitcoin made a high near $39,904. As of writing, the BTC/USD pair is trading below the support level of $38,000 and trying to form a low to consolidate losses.

If Bitcoin moves upside, it can find resistance at $38,200 level and the 100-hour Simply Moving Average, and then near $38,500. However, looking at the chart, the currency is near the 50% Fib retracement level of the downward move. 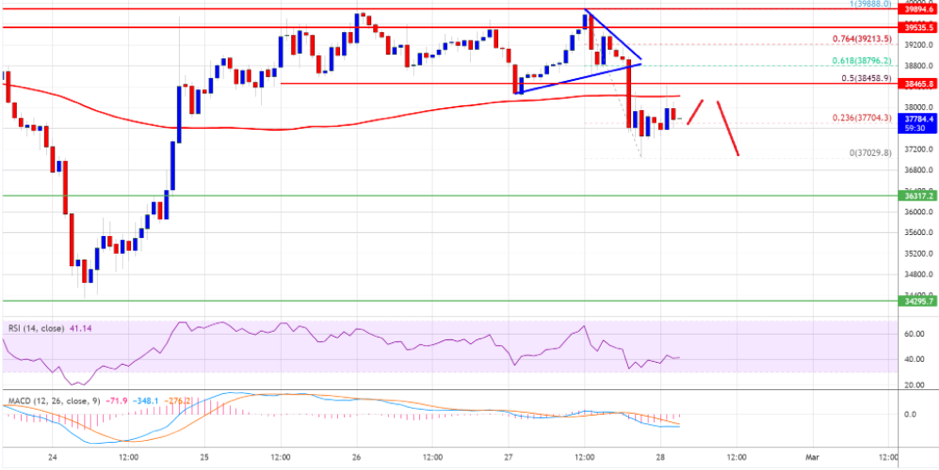 Bitcoin is up by +0/22% as of the time of publishing this article, and if it continues to move upward and break the resistance level at $38,800, we may see its price further higher. If it happens, the next upward movement could even go above $40,000.

Additionally, the data from a blockchain analytics company Santiment suggests that whales have been strongly “buying the dip” as the number of Bitcoin transactions has now reached the highest level since January 24. Here is the tweet from the company, saying the transactions have exceeded $100,000 and $1 million. 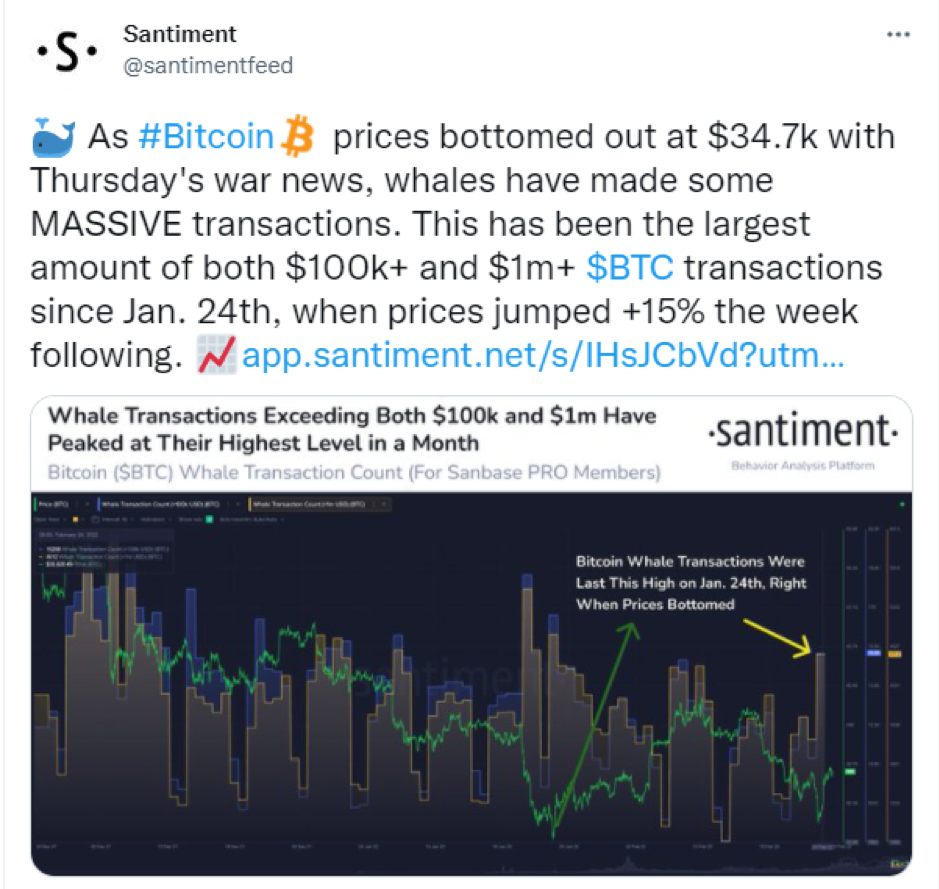 After wicking down towards $2300 on 24th Feb, Eth turned short-time bullish despite the ongoing Russian-Ukraine war, and even touched $2855 yesterday. However, this morning the cryptocurrency is seeing a downward trend and currently trading at $2609. Even, the MACD indicator shows we can expect Ethereum moving towards a downtrend.

Currently, Ethereum is trying to break above the $2800 pivot level and, if successful, the cryptocurrency will likely head to the next levels of $3,000 and $3,400. On the other hand, in a move towards down, there are two key support levels – one at $2500 and the other at $2300. While the currency is up by +0.25% since this morning, it has formed a double top bearish sign on the chart during the weekend. So, we may see it going down in the coming days of the week.

While Ukraine has been getting wordly-support from the world, the crypto community has actually helped the country fight against the invasion by donating over $10 million. On Saturday, the government of Ukraine announced on Twitter that they are accepting cryptocurrency donations of Bitcoin, Ethereum, Tether, and USDT. 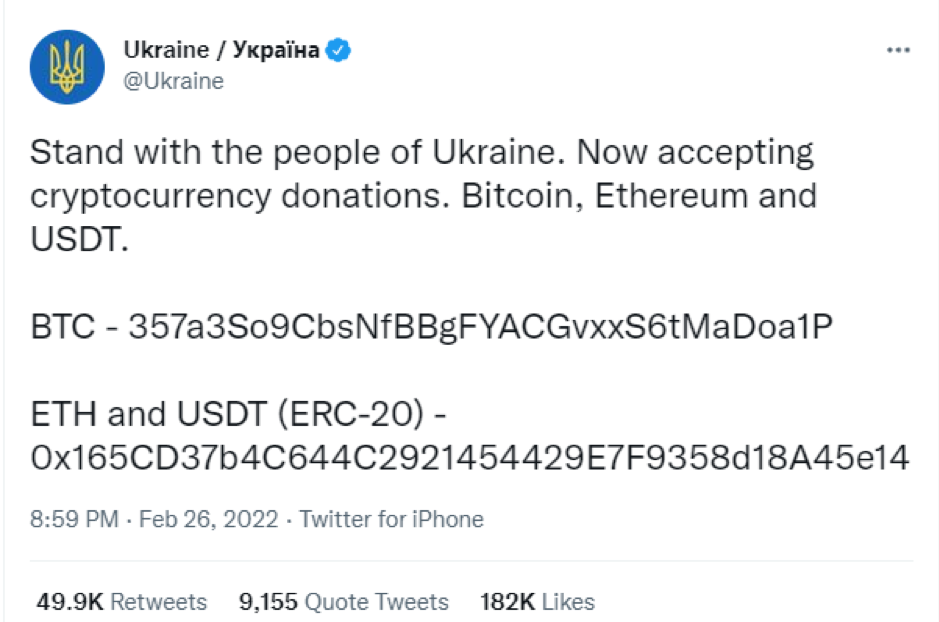 As per Elliptic, a blockchain analytic firm, the donations have increased the $10 million mark. Along with that, Ukraine has also generated about $1.86 million through the sale of an NFT, originally intended to raise funds for the WikiLeaks founder.

US and EU Regulators to Remove Russian Banks from SWIFT

Russia has received another sanction from the leaders of the European Commission, Germany, Frace, Italy, the UK, Canada, and the US, which seeks to ban Russian banks from the Society for Worldwide Interbank Financial Telecommunication (SWIFT). The statement against Russia reads:

“We stand with the Ukrainian government and the Ukrainian people in their heroic efforts to resist Russia’s invasion. Russia’s war represents an assault on fundamental international rules and norms that have prevailed since the Second World War, which we are committed to defending. We will hold Russia to account and collectively ensure that this war is a strategic failure for Putin.”

In addition to a joint decision to sever Russia away from SWIFT, the leaders promised to “commit to imposing restrictive measures that will prevent the Russian Central Bank from deploying its international reserves in ways that undermine the impact of our sanctions.”

On Saturday, a US grand jury charged the founder of crypto exchange BitConnect for fraudulently orchestrating a Ponzi scheme that raised $2.4 million from global investors. Satish Kumbhani, who originally hails from India, was charged in San Diego for false promises of offering returns based on phony software that tracked crypto markets.

Kumbhani has now been charged with wire fraud, commodity price manipulation, international money laundering, and operating an unlicensed money transmitting business. If found guilty, he could get more than 70 years in prison.

In a report published by Wall Street Journal, Coinbase exchange saw an exponential increase in the trading volume from institutional clients. The overall transaction has jumped from $120 billion in 2021 to $1.4 trillion in 2022.

Reportedly, hedge funds have also joined retail traders, which were also joined by registered investment advisers along with some companies.

The Journal also reported that the growth of institutional investment has affected the crypto market in a way that it has begun to copy the traditional financial market of stocks and commodities.

A Comprehensive Analysis of Bitcoin and Ethereum
Scroll to top