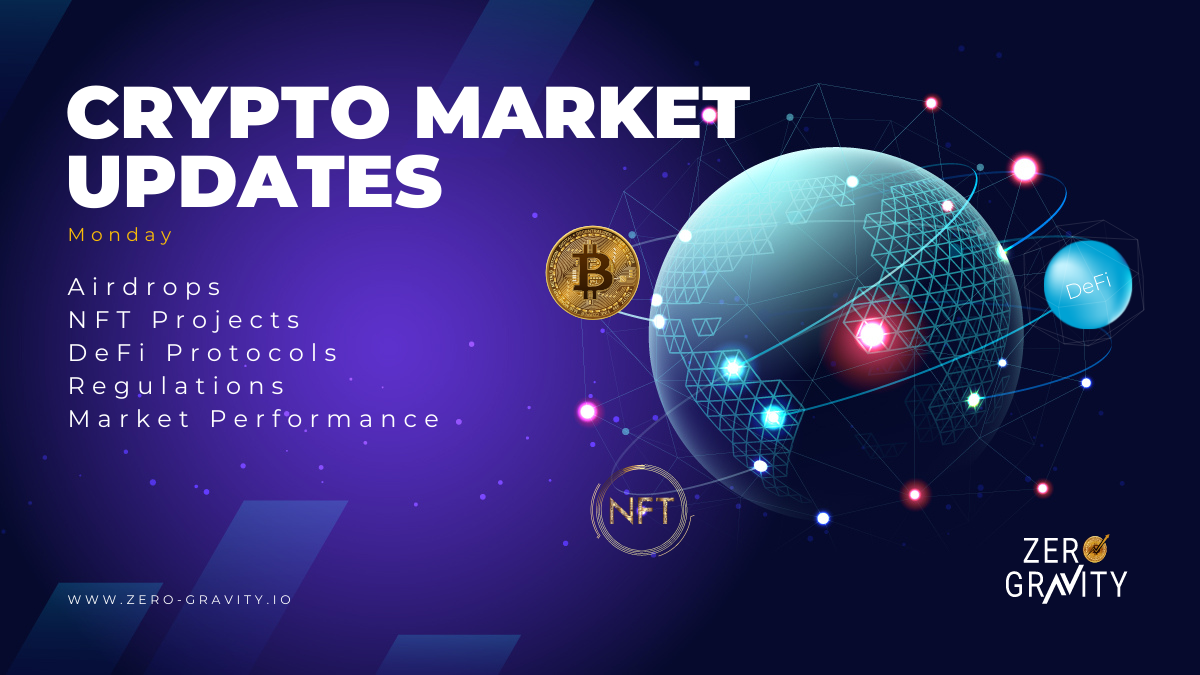 A daily round-up of the most important news stories within the cryptocurrency market and the DeFi and NFT sub-sectors.

Bitcoin Below Key Support – But Better Than Popular Tech Stocks

After failing to clear the resistance level of $45,500, Bitcoin has now broken its key support level of $42,500 and continues to move into a short-term bearish zone. The 100-hr SMA (Simple Moving Average) indicator shows the main resistance is being formed near the $42,847 level, as well as, a key bearish trend line forming on the daily chart of the BTC/USD pair.

Though Bitcoin is dipping below its crucial support level, it has outperformed six major tech stocks. As per the weekly data from Finbold experience, the cryptocurrency outperformed Meta (formerly Facebook) by 2.25%, Amazon by 2.84%, Google by 3.47%, Microsoft by 1.81%, Apple by 1.60%, followed by electric vehicle manufacturer Tesla at 5.31%.

Two of the biggest crypto exchanges, FTX and Coinbase, have bought their own Super Bowl ads to introduce cryptocurrencies to the mainstream audience.

While FTX tapped Larry David to stand out in its first advertising at the Super Bowl, Coinbase made its debut with a clever colorful QR code reminiscent of the legendary bouncing DVD logo meme.

Additionally, Crypto.com, and eToro also aired their respective ads during the biggest game in American football. However, their advertisements didn’t receive as much popularity and attention as FTX’s and Coinbase’s ads.

Regulatory Obscurity and the Demand for Outright Ban

Despite the Indian FM’s announcement to tax cryptocurrency income, many are confused about whether crypto is now legal or legitimate in the country.

On Saturday, the Union Minister of State for Finance, Bhagwat Karad, reportedly said that cryptocurrencies are not yet legal in India because the Reserve Bank of India (central bank) has not given any recognition to cryptocurrencies.

However, a while back, Finance Secretary, Mr. Somanathan, said that cryptocurrencies are not illegal as of now.

Both the comments are from top government officials, which puts the whole narrative of “if crypto assets are legal or not” in the gray area. While citizens are confused about the legal status of cryptocurrencies, it’s clear that the government is going to impose a 30% tax on income from cryptocurrencies.

Reportedly, the government is now reworking the cryptocurrency bill, which is expected to clarify doubts on the legality of crypto assets in India.

In the other part of the world, the Governor of the Hungarian Central Bank, György Matolcsy, has recommended an outright ban on crypto-related services like mining and trading across the European Union. His response aligns with the comments from the Russian Central Bank on the ban of cryptocurrencies.

The UK Catches its First-Ever Tax Evasion Fraud With NFTs

The UK tax authority, HM Revenue and Customs (HMRC) have reportedly arrested three people on the suspicion of attempting a VAT fraud that includes 250 alleged fake companies. The authority has seized three Non-Fungible Tokens (NFTs) as part of their investigation of a fraud case that is worth as much as $1.8 million.

This arrest is the UK’s first seizure of an NFT, which serves as a “warning to anyone who thinks they can use crypto assets to hide money from HMRC”, said Nick Sharp, the deputy director of economic crime.

The cryptocurrency mining industry is about to get some relief on taxes as indicated in a letter sent to a group of senators.

The U.S. Treasury department that deals in collecting taxes have shared a plan to exempt crypto miners, stakers, and several “ancillary parties” from the tax reporting rule, which requires them to share data on their clients’ transaction with the IRS. The news was confirmed by Ohio Republican Senator, Rob Portman on Twitter. 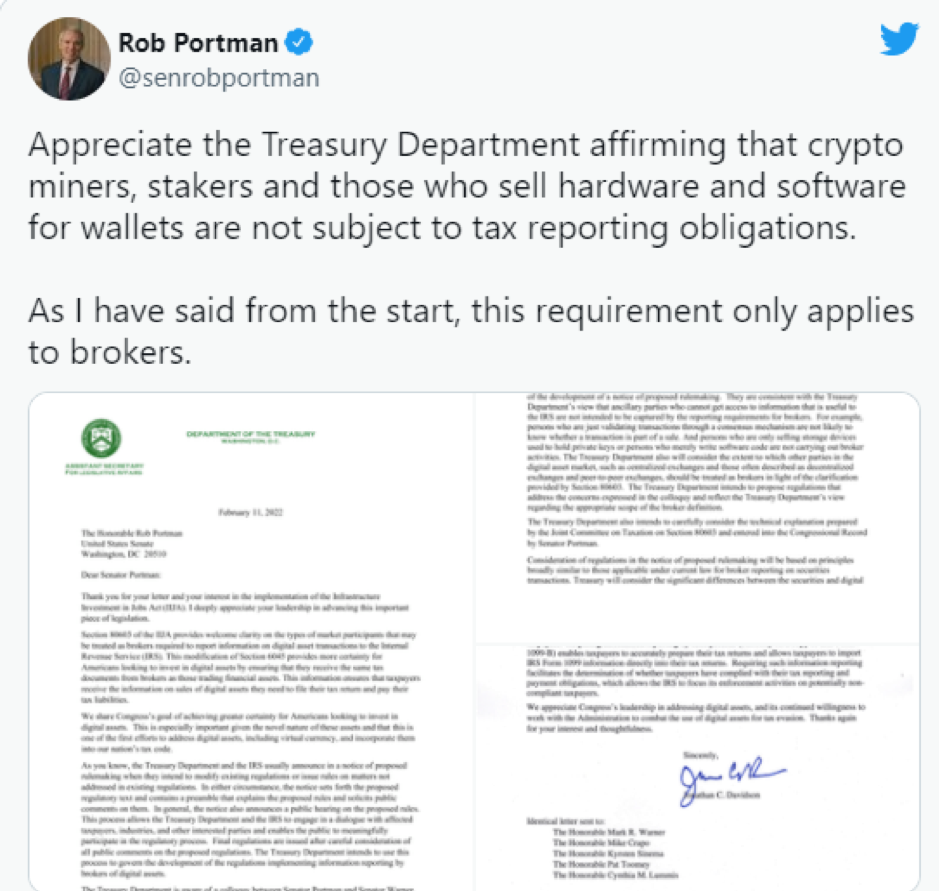 The tax exemption is probably the second good news for miners. The growing hash rate is the first one!

The world’s first cryptocurrency’s rate has gone parabolic over the weekend and continues to gain momentum. The latest hash rate of Bitcoin reads 201.293 terahashes per second (TH/s) as of the time of writing. 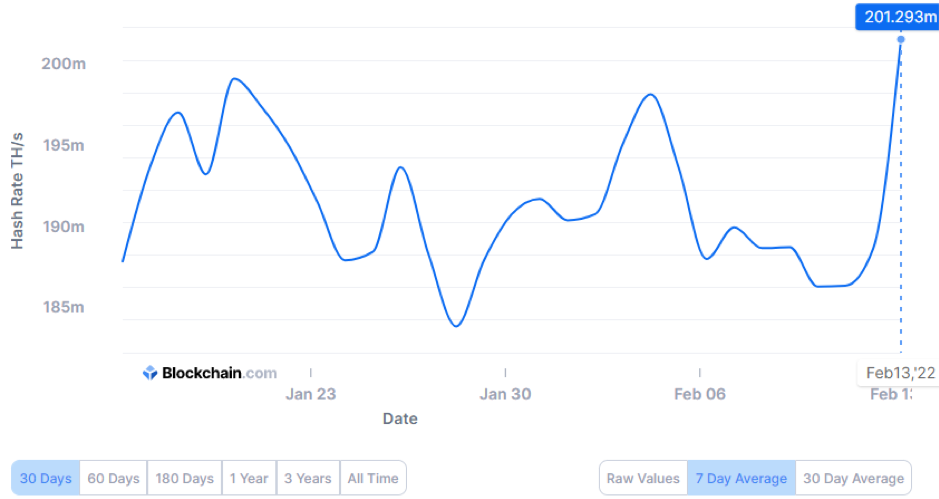 For those unaware, a high hash rate means a healthy network, which also leads to a higher value of Bitcoin. Therefore, higher rewards for mines from transaction fees collected on the blockchain network.