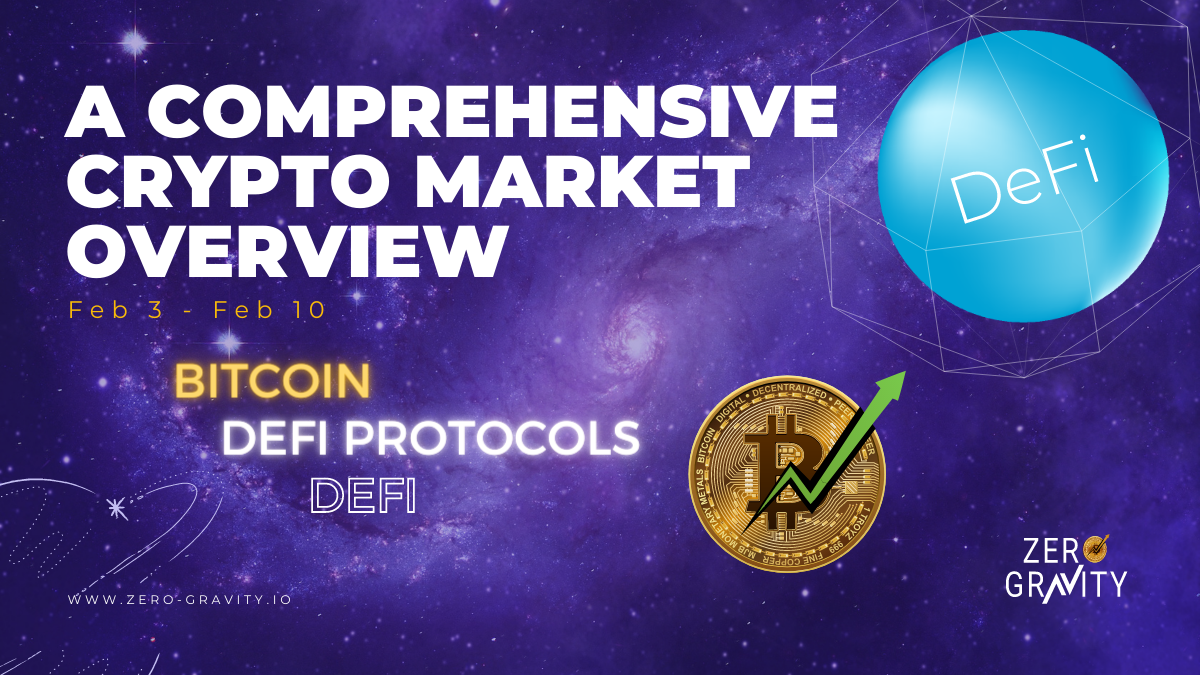 After a previous tumultuous week with most cryptocurrencies dipping to a significant level, the crypto market is finally starting to animate green candles on this weekly trading chart. Over the weekly period, the market cap of cryptocurrencies has grown from ~$1.7 trillion to more than $2 trillion while their trading volume has increased by 8 billion in the last seven days.

Despite the growth, several technical indicators show the likelihood of a short downside correction in the coming days, particularly in top cryptocurrencies like Bitcoin and Ethereum. We might see similar changes in the Decentralized Finance (DeFi) market.

In this blog post, we analyze different segments of the crypto market and also look at the price action of the largest cryptocurrency by market cap – Bitcoin.

Bitcoin – Hovering Around A Resistance Level for The Better

In the past week, Bitcoin has rebounded strongly as it hit $45,000 on Tuesday for the first time since January and is up by approximately 12% as of the time of writing. The price rally is largely driven in part by the liquidation of several short positions accumulated in the monthly downward trend of cryptocurrencies.

However, after reaching the $45,500 mark, the Bitcoin/USD pair fluctuated by $1000 on intra-hour and even more later yesterday and today, circling close to $44,000 at the time of writing. While the move represents a resistance at the current price level, the latest surge before consolidation represents a breakout of a downtrend in place since Bitcoin’s last-time highs in November 2021.

What Investors Should Know?

Despite significant growth, the Bitcoin market is expected to do a “healthy correction” in order to have another shot at reaching heights not seen in the last three months.

Below are various Exponential Moving Average (EMA) periods of Bitcoin, including a 12 – and 20-day period along with several short – and long-term periods. In the chart, two particular bearish indicators exist. First, the 9-day EMA crosses below the 20-day EMA. Second, the blue line (representing the buy signals) is crossing below the red line (representing the sell signals). 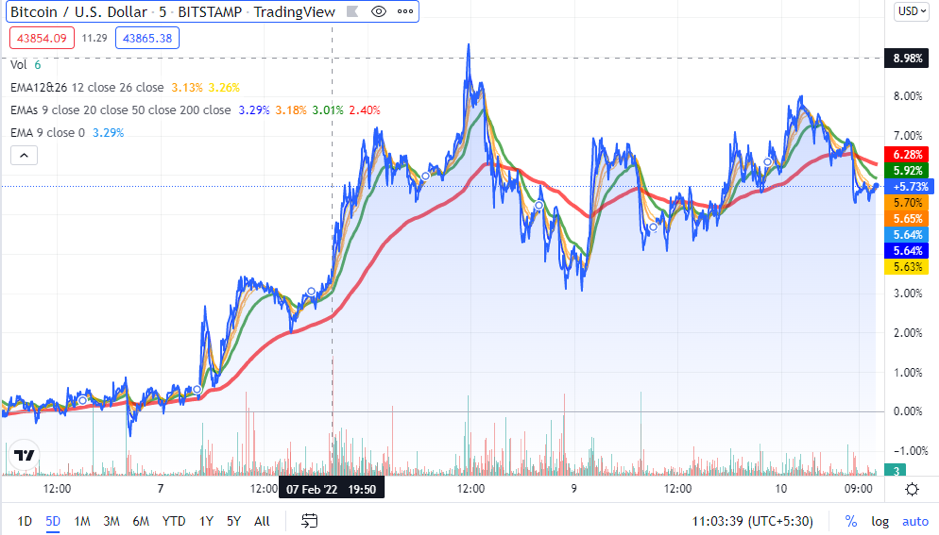 On the other hand, all the Oscillator indicators are showing a neutral sign except the MACD indicator, which indicates that the MACD line of Bitcoin crosses from above to below the signal line. 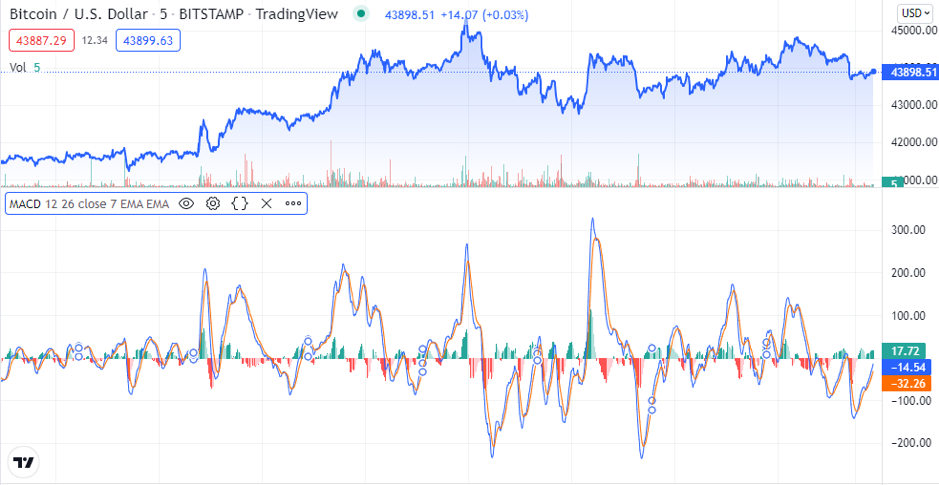 It can be concluded from the chart that the market is bullish and we might see buy orders in the coming days.

DeFi – Growing, But At A Slow Rate

Despite lingering concerns about regulations the DeFi market has surged in the past week to post an emphatic recovery from significant lows in January. The combined DeFi market cap sits at ~118 billion, having bounced 12.38% since the low of $105 on Feb 4. 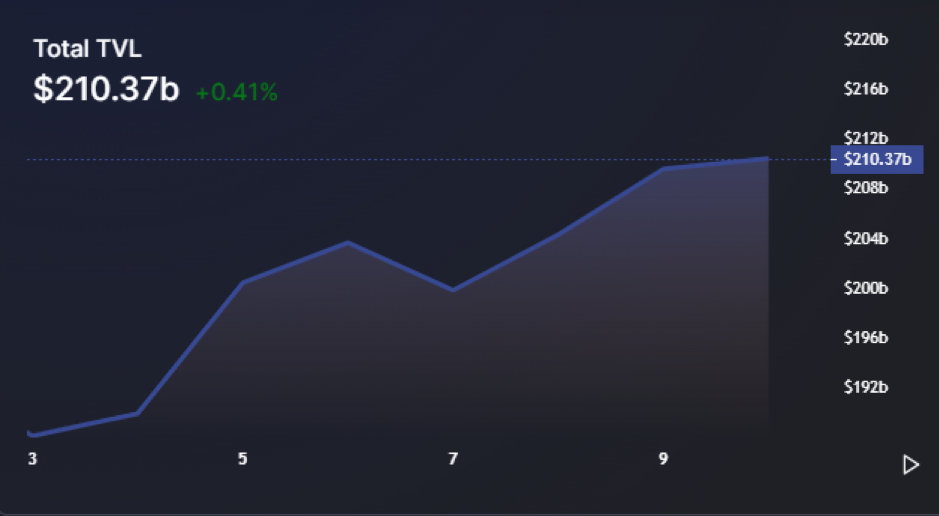 Curve is still the most dominant and largest protocol in the Defi sector with $19.85 billion TVL locked that has gained about 11.64% in the last seven days. MakerDAO ranks second with $17.99 billion TVL and is up 14.77% in the last week, while Aave is third after gaining 18% since Feb 4. Nonetheless, Terra remains DeFi’s top token with a market cap of ~$22million and is up 17.4% in the last week.

The TVL of layer-2 solutions on Ethereum is at $6.55 billion after bouncing 18.65% since Feb 3. Arbitrum remains the biggest DeFi protocol in terms of TVL with a weekly growth of 27.92%.

What Investors Should Know?

A recent report from Consensys suggests DeFi will again take the crypto’s center stage in the coming days. The increased number of unique DeFi addresses in the recent days suggests a good health of the DeFi ecosystem, suggesting a noteworthy growth in the TVL should new addresses continue to grow.

Another report by Huobi further expects major growth of DeFi, however; it’ll be driven largely by institutions stepping into the sector.

On the other hand, comments from “Crypto Mom ” and SEC Chairman Gensler predict DeFi will soon face a regulatory reckoning, which may have detrimental effects on the overall DeFi market.